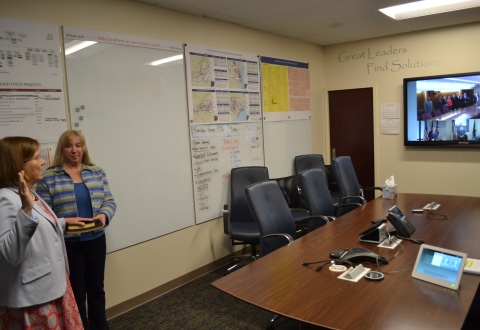 The Department of Veterans Affairs is proud to announce Anne C. Hutchins, M.D. has been appointed the Chief Medical Officer for the Department of Veterans Affairs Mid-Atlantic Health Care Network, Veterans Integrated Service Network (VISN 6) effective June 23.
The Veterans Affairs Mid-Atlantic Health Care Network is comprised of seven VA Medical Centers and 27 associated community-based outpatient clinics (CBOCs), five Health Care Centers, and two free-standing Dialysis Clinics spanning North Carolina and Virginia. The network utilizes more than 5,700 clinical staff of a total 18,000-plus staff members, and about 4,000 volunteers to serve greater than 399,000 Veterans annually across a two-state service area.
Dr. Hutchins has served VA, working at the Salem VA Medical Center in Salem, Va., since 1989. She took a break in service to work as a private sector practitioner from 1992-95, enabling her to concentrate in areas of medicine that have enhanced her abilities to serve all Veterans.  Since then, she spent 12 years in Primary Care, Geriatrics and Extended Care, before assuming leadership roles there.  Since 2006 Hutchins served as a leader in Geriatrics and Extended Care until 2012, when she became Chief of Staff for the medical center. As Chief of Staff, Hutchins managed the care of more than 38,000 Veterans through an outstanding record of service. In fact, she led Salem VA Medical Center through many Joint Commission and Inspector General surveys and inspections, including a Comprehensive Health Care Inspection Program (CHIP) in 2018 with just one recommendation for improvement and the facility received no findings during a College of American Pathologists (CAP) survey on Lab standards in 2017.
“The Veterans of Southwestern Virginia have been extremely fortunate that Dr. Hutchins has been ensuring quality care is available to them at Salem and its subordinate community-based clinics,” declared VISN 6 Director DeAnne Seekins. “She is dedicated to helping Veterans live their best lives through optimized care that keeps Veterans safe. We are ecstatic that she has elected to elevate her level of service to every Veteran in the VISN.”
Hutchins graduated from the Medical University of South Carolina in 1986 and the University of Virginia Carillon Internal Medicine Residency Program in 1989, when she became Board Certified in Internal Medicine the same year.  She became Board Certified in Hospice and Palliative Medicine in 2013.
Dr. Hutchins is not just a practitioner, but a teacher as well.  She has been a Teaching Attending physician for multiple academic affiliates since 1992 and an Assistant Professor of Clinical Internal Medicine at the University of Virginia since 1997.
Dr. Hutchins has maintained a professional association with the American Academy of Hospice and Palliative Care Medicine since 2007, as well as a membership in the American Medical Association.
“The VISN has already glimpsed the excellence Dr. Hutchins’ presence holds for the future,” Seekins said.  “She has enhanced VISN clinical operations since filling in temporarily since January when the post became vacant.  Anne is certainly the right person to lead our team on the path to becoming a high reliability organization.”