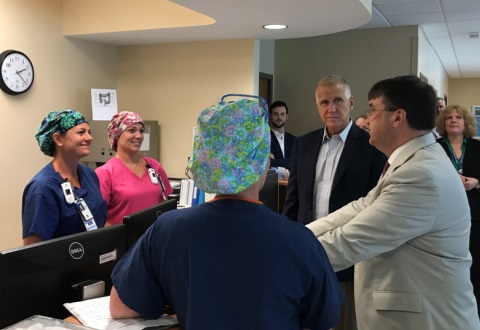 By Steve Wilkins, VISN 6 public affairs
Thursday, August 15, 2019
Almost a year ago, the Wilmington VA Health Care Center stood in a shambles.  A victim of Hurricane Florence, as it ravaged the Wilmington area, the facility had been severely damaged and Veterans were diverted for some time to receive care from volunteers in mobile medical units and other locations in the community.
“The building had holes in it,” declared VA Secretary Robert Wilkie, reflecting on the “destruction” he saw personally, during a visit right after the storm.  The Secretary accompanied Senator Thom Tillis through stops at the Wilmington HCC and other locations in the Fayetteville NC Coastal Health Care System catchment August 6 and 7, meeting Veterans and staff.   They were following up on hurricane recovery efforts and seemed pleased with what they found.
The Wilmington facility bounced back within weeks of the weather event, so was fully operational as they toured with facility administrator Deborah Caruso, Fayetteville NC Coastal Health Care System Director Daniel Dücker and VISN 6 Director DeAnne Seekins. 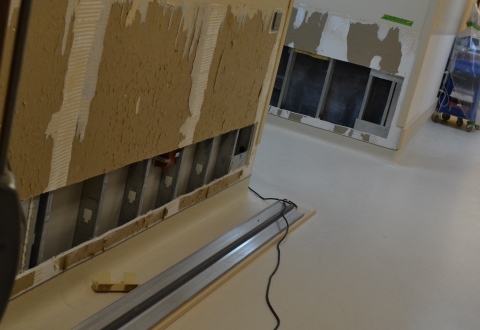 The Wilmington VA Health Care Center was damaged by Hurricane Florence as it crossed North Carolina last year. This photo shows damage to floors and walls from flooding. Secretary Wilkie and Senator Tillis toured the facility recently to review progress and were impressed with reparations and operations now, nearly a year after the storm.

Impressed with the robust clip of Veterans passing through VA’s doors, and Veterans’ complimentary comments (the Wilmington HCC currently boasts an 88 percent trust score), walking the facility hallways, the Secretary noted his interest in continuing to answer the call of a growing Veteran population throughout North Carolina.
According to his statistics, Wilkie mentioned that North Carolina would have more Veterans than California by 2030, continuing the current pace; and that only Texas contained a larger rural population.  In fact, Women Veterans receiving care at the Wilmington HCC comprise practically one fifth of Veterans seen there.
Throughout the visit, Wilkie seemed genuinely in the moment, and engaged.  Caruso observed, “I was captivated by Secretary Wilkie’s commitment, dedication and concern for our Veterans; and his love of military history.”

In addition to the Veterans they met in Wilmington, the group admired the HCC’s “Honor our Veterans” displays. The facility dedicated a wall of military patches that Veterans can add to, or place challenge coins and other memorabilia in decorative display cabinets nearby.
Wilkie and Tillis stressed the importance of mental health strategies, and how they figured into a solution to the present suicide epidemic.  Wilkie agreed with Tillis that most Veterans committing suicide are outside the system, but he added that services like same-day counseling and mental health screening for Veterans as they come through any facility doors will help stem crisis.
They urged everyone to be involved in helping others in crisis and pointed out the most important thing is to ask the question of anyone who appears in crisis whether they have thought of harming themselves or others.
Director Seekins also accompanied Secretary Wilkie and Senator Tillis on a tour of the Veterans Life Center, currently under construction in Butner, N.C. The center, a private venture with broad community support,  will help Veterans who have been displaced or have found themselves in dire circumstances redirect their paths toward success.
return to top