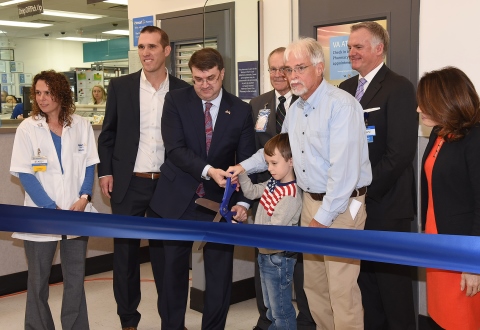 Secretary of Veterans Affairs, Robert Wilkie, attends ribbon-cutting event for VA telehealth at Asheboro Walmart along with Veteran Wayne Shaw and his grandson on December 10, 2019. (photo by Luke Thompson)

By Collaboration by VISN 6 public affairs, with Durham and Salisbury public affairs teams
Thursday, January 9, 2020
VISN 6 Network Director DeAnne Seekins accompanied Secretary of Veterans Affairs, Robert L. Wilkie, on a visit to Durham VA's main facility December 9, before traveling to Asheboro, N.C. December 10 for an historic ribbon-cutting.
Secretary Wilkie’s trip began with Durham's leadership brief on overall concerns, growth and the future of VA health care in central and eastern North Carolina. The son of a career Army Officer, Wilkie spent his formative years in Fayetteville, N.C., so he is familiar with the Durham area. Seekins, who is a former Durham VA Director, escorted the Secretary with current facility leadership through the building, visiting with Veterans, talking with staff and presenting awards to deserving employees.
Wilkie visited the Cardio Cath Lab, to see the newly-introduced, cutting-edge surgical technology CardioMEMS, as well as the Traumatic Brain Injury (TBI) and Audiology and Speech Pathology Services.
In fact, the Secretary took time to speak with Army Veteran Jason Horton, via a Telehealth connection.
“I’ve been doing telehealth through Durham VA for over a year now,” said Horton. “I didn’t expect to see Secretary Wilkie on the other screen. Certainly, one of the better sessions I’ve had.”
During this visit, the Secretary expressed his appreciation for DVAHCS staff’s ability to meet the unique needs of local Veterans.
“Our numbers are going up; we’re getting more Veterans through the door and into the VA system,” he said. “That’s something everyone here should be proud of.”
Since taking office in July of 2018, Secretary Wilkie has made a point of visiting VA facilities across the country, meeting with Veterans and staff to discuss real issues and create workable and realistic solutions. 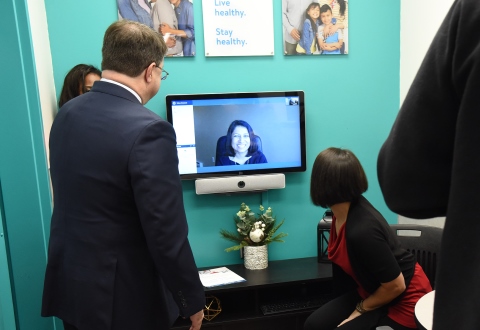 Secretary Wilkie observes a demonstration of equipment operation at the new Telehealth space for Veterans at Walmart in Asheboro, NC is unveiled on December 10, 2019. (photo by Luke Thompson)

The Asheboro, NC Wal-Mart is one of five nationwide pilot locations. They launched a soft opening December 11. The W.G. “Bill” Hefner VA in Salisbury is associated with the Asheboro site, which offers Mental Health, Social Work and Food and Nutrition services to Veterans.
Vietnam Veteran Wayne Shaw a resident of Randolph County, where the Wal-Mart is located, also attended the ceremony. He expressed his hopes for the future of this new VA telehealth collaboration. Secretary Wilkie even took part in the initial Telehealth call with Heyworth, connected virtually to a provider located at the Hunter Holmes McGuire VAMC in Richmond, Va.
return to top