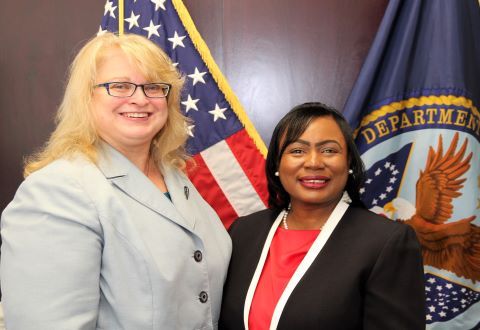 The Department of Veterans Affairs is pleased to announce Dr. Taquisa K. Simmons' appointment as the Hampton VA Medical Center's new executive Director. Dr. Simmons will oversee the delivery of health care to more than 59,050 Veterans at the medical center, which is currently experiencing a 16.82 percent growth rate (more than five times the national average) and an operating budget exceeding $500 million.

"I am proud to announce the selection of Dr. Simmons as the new Medical Center Director for Hampton VA," said Stephanie Young, Acting Director of the Mid-Atlantic Health Care Network (VISN 6). "She is a results-driven leader with incredible experience managing health care operations in the community as well as her work in VA, developing patient-centered policy and inspiring quality performance. We look forward to her steady leadership."

Dr. Simmons joined VA as a supervisory social worker in 2013 and has held administrative leadership roles since being appointed assistant director of the McGuire VA Medical Center in Richmond in 2014. While assigned to the Richmond VA, Dr. Simmons served as interim associate director in 2017 and then was appointed as acting associate director at the Hampton VA, where she assumed the role permanently in March 2018. Dr. Simmons also spent six months in 2019 serving as interim medical center director at Hampton.

As a leader, Dr. Simmons has revitalized worker performance in areas where she was assigned, improved customer service, and while at Hampton, led the safe evacuation and return of hundreds of high-risk patients during Hurricane Florence.

Dr. Simmons is a licensed Clinical Social Worker and earned a PhD. in Counselor Education and Supervision from Regent University in 2014.

With more than 2,400 employees, the Hampton VA Medical Center is a 382-bed teaching facility serving Veterans in eastern Virginia and northeastern North Carolina. The medical center, 4th oldest in the nation, is located on 85 acres overlooking the Chesapeake Bay and includes outpatient clinics in Chesapeake, Portsmouth, Virginia Beach, Va., and Elizabeth City, N.C.