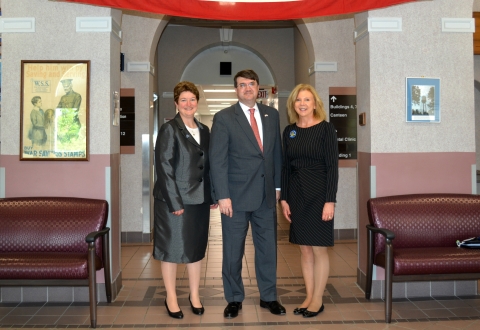 By Brett Robbins, Salem VA public affairs and Steve Wilkins, VISN 6 public affairs
Friday, June 7, 2019
VA Secretary Robert Wilkie observed D-Day’s 75th Anniversary devoted to making sure Veterans know he cares.  He attended an emotional ceremony in Bedford, Va. with Vice President Mike Pence.  Known as the Bedford Boys, 35 Bedford men stormed the beaches with the 116th Infantry during the June 6 invasion. Bedford lost 19 of its own that day.
Moving quickly from Bedford, Va. to Salem VA Medical Center, the VA’s top executive then joined VISN 6 Network Director DeAnne Seekins and Salem VA Medical Center Director, Rebecca Stackhouse to support the implementation of the Maintaining Internal Systems and Strengthening Integrated Outside Networks (MISSION) Act of 2018. The MISSION Act represents a transformation in VA’s service to Veterans, putting them at the center of their care in a way that enhances their health care experience, and delivers exceptional care in the shortest time, with dignity. 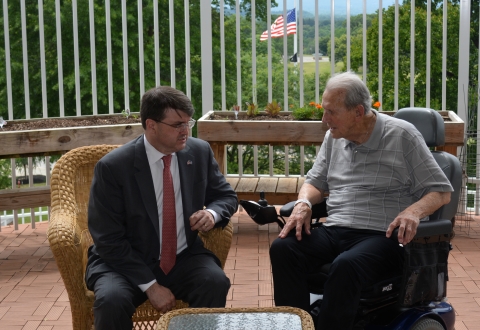 Wilkie, Seekins, Stackhouse, and a host of other executives toured the medical center, met with staff and received a briefing on the operational status of the program as it transitions to using the components of the MISSION Act at Salem VA from Medical Center.
“Today was implementation day for the community care network part of the MISSION Act,” said Stackhouse. “It provides an urgent care benefit for our veterans and helps us really look at how we can strengthen both our workforce and infrastructure. Later in the Fall, we will begin expanding the caregiver support program.”
VA is dedicated to optimizing health care delivery for our Nation’s Heroes, so they receive high quality care as soon as it is available with greatest convenience.
Seekins and her staff believe the day is significant because it immediately affects where and how Veterans receive their health care.  It provides expanded choices in and outside VA, empowering them to participate in what their health care looks like and how they will stay healthy. 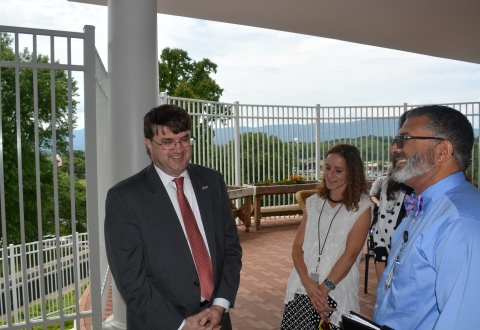 An Air Force Reserve officer himself, and son of a Veteran, Wilkie’s D Day observance culminated in meeting a World War II hero face-to-face at medical center’s Community Living Center when he met Brig. Gen. (Ret.) Leo LaCasse, a WWII Veteran who, as a pilot with the 385th Bomb Group survived three crash landings and evaded 4,000 enemy troops. The two sat down to talk like old friends catching-up on a summer day. LaCasse was awarded the French Legion of Honour Medal in June 2016.
Seekins is optimistic about the implementation of the MISSION Act. VISN 6 staff across North Carolina and Virginia have worked hard and trained diligently so that, although Veterans may notice some changes in the way they set appointments and interact with their health care teams, their experience should be seamless.
return to top